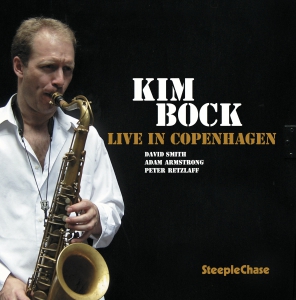 While many of the artists featured as leaders on Steeplechase are up-and-coming American instrumentalists deserving of wider attention, tenor saxophonist Kim Bock is a veteran home-grown Danish musician, though like his labelmates he merits greater world-wide exposure, too. With an international group including Canadian trumpeter David Smith, Australian bassist Adam Armstrong, and American drummer Peter Retzlaff, Bock delivers the goods in this live set, with five potent originals that allow plenty of room for stretching out without losing focus. The extended opener, “The Plus Side,” features powerful solos by Bock and Smith with the rhythm section taking it out in an understated manner. The brooding “Pink” is a haunting ballad, while “Secrets,” a piece previously recorded by the saxophonist, becomes more abstract compared to its studio version. The conclusion is “Tumble,” in which Smith echoes Bock’s lines just a few bars behind him. Recommended.

WHEN Danish saxophonist Kim Bock makes a regular return from his New York professional base to Copenhagen, the locals don’t kill the fatted calf, but listeners do turn out in droves to hear one of the country’s contemporary jazz sons who have established himself in arguably the most competitive music environment on earth.

On going back to his homeland in the late winter of 2008, Kim brought with him the three colleagues who complete an international quartet, now established for more than four years.

The line-up is identical to that featured on Bock’s SteepleChase debut CD, “Secrets” (SCCD 31603). Thus, once again Kim’s tenor is stalked by the intelligent trumpet of Canadian David Smith and stoked by the rhythmically flexible partnership of Australian Adam Armstrong (bass) and Peter Retzlaff (drums), born in Ohio. Four men from as many countries and three continents! But now all adopted New Yorkers.

The quartet’s Scandinavian tour naturally included a one-nighter in wonderful Copenhagen, where the Jazzkælderen Club was the scene for two exciting sets of spontaneous, energised performances on the final gig of their 10- day caravan. The venue, run by an American guy, serves as a record store/ jazz cafe by day, transformed into a cozy concert situation by night. The acoustics are excellent, thanks to a wooden floor and fitments.

Recording equipment was set up there by Arne Block, Kim’s younger brother, who plays fine trumpet, but studied in Holland and Spain to become a qualified sound engineer. His skill, coupled with state-of-the-art technology, ensured first class audio results for this assignment. And it isn’t always easy to achieve good balance and a nice sound on location.

“I think the CD captures very well how our band sounds,” says 42-year-old Kim. “This was our second trip to Scandinavia and we plan to return again for festival dates in the summer of 2009. I believe the real depth of the quartet is displayed here and it shows the progress and development we have made over the past four years. When you’ve been on the road for ten days, playing together every night, the closeness and understanding colours the music.”

As on their 2006 studio session, the band held forth exclusively on compositions penned by the leader, and, indeed, chose to interpret new and longer versions of two originals which also featured in Secrets, namely Pink and, yes, a much expanded re-run of Secrets itself. These new versions prove how a piece can be re-configured, especially given the ambience created by an attentive and sympathetic audience. This is not the place to compare the virtues of studio versus live interpretation. Suffice to say that those encountering Kim and colleagues here for the first time, will surely wish to explore their earlier release and judge the respective attributes for themselves.

However, since the “new” Secrets lasts for twice the duration of the earlier attempt, there is inevitably considerably greater content and a freer feeling resulting from the uninhibited atmosphere of the relaxed club setting. Yet the validity of both the formal and informal assessments is clear; each stands on its own merits. The contrasting situations throw up differing responses, part of the reason why “takes” from varied locations are never the same and often not even similar. The nature of a performance is determined in the moment, and that’s what makes it so interesting.

Kim’s other concoctions featured here are The Plus Side, Brushes (wherein the bristling brushwork of drummer Retzlaff is a constant) and the descriptive Tumble. These selections are fully explored by the quartet, each member playing his part in creating a whole. Kim explains: “One of the new pieces was Brushes which features Peter. I named the tune Tumble because that feeling is echoed within the phrasing and responses. We had a lot of fun with this. The Plus Side suggests a positive vibe. It has some of that modal stuff which Elvin Jones used to apply so well in his groups, especially in his recordings at the Lighthouse. We often play this as a set opener, as on the CD.”

All these men can be found in various big bands and smaller groups around New York. Kim, for instance, along with Peter Retzlaff, often links up with organist Søren Møller in a swinging trio. David Smith pops up in a number of aggregations, and ditto for Adam Armstrong. But the music the four most enjoy is when they team up in concert or club or at a festival.

“I think of the band as my playground. I put my heart into it, and the other fellows also feel that way. Although I write all the music, when we try out what may start as just a rough sketch, the other have a lot of input, and we try out many ideas. In that sense this is a co-operative quartet.

If we have a gig coming up, we hang out and rehearse. I live in Manhattan, but the other three reside in Brooklyn, and we usually rehearse at Peter’s apartment. He has tolerant neighbours who don’t complain about noise.”

Recently married, Kim is content with his life, and remains optimistic. “The world recession has affected everyone, but doesn’t impact on my life to any great degree. If I’m writing or playing, then that is satisfaction. I find constant joy in the music, especially when making it in the company of these three creative colleagues.”

As Bock has indicated, much of his inspiration as an improviser and composer was drawn from the Ornette Coleman Quartet of the 1960s which featured trumpeter Don Cherry. That influence can be detected in the methodology of Kim’s unit, and he thinks that the musical rapport he enjoys with Smith is a contemporary reflection of the Coleman/ Cherry partnership which flourished almost 50 years ago.

Kim Bock and his cosmopolitan crew serve us up another freewheeling feast of jazz that is never dogmatic about structure, yet stays within the realms of good communication to those with open ears and minds. Certainly, the listeners at the Jazzkælderen responded positively to what they heard and will want this souvenir of a joyous occasion. Fortunately, a host of others not present that night can now also share in and absorb the invigorating sounds so beautifully captured by brother Arne on his immaculate set-up!